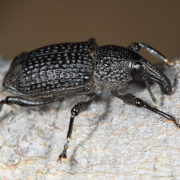 In 2005, in the nursery district of Pistoia, began the first sightings of a new Beetle of the Curculionidi family, causing considerable damage to all cultivated Ficus carica.
We are talking about the Aclees cribratus, a beetle originally from Southeast Asia, found for the first time in France in 1997. More in-depth studies have shown that the population present in Tuscany is made up of newly emerged individuals, which are not yet ranked taxonomically, generally defined as Aclees sp..
The adult appears as a large (15-16 mm) curculionide, black in color, with a wide back, no hull, narrowing to the elite base and covered by spots.
In the nursery, this insect runs two annual cycles: the first in June, the second in September. After flickering, the adult is divided between the plants of guest Ficus and the turf grass. Its main nourishment is the bark and the fruits, especially the maturing ones and placed in the apical part of the branch.
The females dig long tunnels in the wood making themselves big thanks to the rostrum. At the bottom of each tunnel they lay an egg that will have an incubation period of 10-20 days. The larva is xylophone and hypogea, or it feeds on the wood that is in the soil.
Attached plant can accommodate up to 8-12 individuals. The larvae, nourished with frenzy, excavate articulated tunnels in the wood, thus causing great damage to the root and collar. The affected plant is so weak, with growing difficulty, with diffuse necrosis and in some cases it can get to death.
At present, various tests have been carried out to control this insect; the fight against larvae has proved to be unsuccessful, especially because young stadiums reside within the hypogeum wood and are therefore difficult to reach. Also systemic or biological insecticides (with the use of nematodes) have proved useless.
However, good results have been obtained with the fight against the adult, in particular by using contact insecticides such as pyrethroids.
The interventions must be made regularly, bearing in mind that the two pecking pairs of the insect are in June and September.
After the first apparitions in the nursery, the Acless was also found on plants planted. The great damage that this insect causes to Ficus Carica L., a plant typical of the Mediterranean Area and with considerable ornamental aptitude, makes it necessary to find specific methods of fighting, possibly larvicide.
In this sense, a rational path to be undertaken and already under study could be the selection of new strains of insecticidal microorganisms capable of colonizing the jar planting substrate.

The fruit trees … not only goodness but also so much beauty!
Scroll to top
This popup will close in: