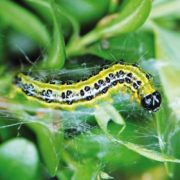 The Cydalima perspectalis is a real menace for the boxwood plants in the vivarium and gardens of the old continent.

The first report in Europe is dated back in 2007 in Germany. In the next years the parasite has continued to spread, reaching the year after France, Switzerland, UK and the Netherlands; in 2009 it was detected in Austria and in the Netherlands; Finally in July 2011 its first discovery in Italy, in Lombardy, in the province of Como.

Fearing the rapid spread, in 2007 it has been inserted from the EPPO (European and Mediterranean Plant Protecion Organization) in the list of alert (Eppo alert list) where then it remained for more than three years.

In 2011, the reporting given was considered enough and therefore, in the absence of particular requirements from the EPPO member countries to combat the insect, it was deleted from the alert list.

Unfortunately, it is not extinguished. Fortunately this is not a quarantine pest, but the larvae that feed on the leaves of boxwood are due to large and substantial damage, physiological and economic.

The adult is a butterfly with a wingspan of 4 cm, and white wings with nuances of gold to purple and brown edges. The biological cycle in Europe is not yet clear: the first observations made in Germany and Italy seem to show that the insect performs four generations per year and it is able to spend the winter as a chrysalis on the plants.

The following year, during the month of March by reaching 20° C temperature, the development is completed; adults flicker and through spawning, they start the first generation.

The butterfly lives an average of 8 days and it can also fly for several kilometers.

Despite its excellent flying capacity the main cause of its diffusion in new areas,  very distant from Those of origin, is the transportation of box trees coming from infested countries.

Eggs, large few millimeters, are laid in groups of 25-30, partially topped one on another, below the leaf page. Initially pale yellow almost transparent, they turn brown with ripening.

The yellowish green color larvae are characterized by black and white streaks bands along the body, they are also covered with sparse hairs which grow from black pustules present longitudinally on the body.

At maturity they reach 4 cm and they are the heads of major aesthetic damage, feeding on both the leaves and the sprouts.

High infestation levels can lead to the complete defoliation of the plants on which we note the presence of a dense network of silk threads. They take about 25 days to reach maturity and become a chrysalis.

Pupae measure 2 cm, and initially have a green color with black stripes along the dorsal part, then, with age, they become dark brown. They are well-hidden in the vegetation where, thanks to the silk threads, remain attached to the leaves for about 14 days, long enough to grow again in adults.

At the end of the third generation the chrysalis doesn’t mature right away, but it winters waiting for the spring favorable thermal conditions.

The prevention is currently limited to the control of incoming plants from contaminated countries.

You must verify that there are no clear signs of attacks, eggs, larvae or pupae over boxwood plants purchased.

When the insect has successfully colonized a new areal, spreading quickly, the only solution is to intervene with targeted insecticide treatments.

The fight against this defoliating can be biological, chemical or biotechnology.

They can be used natural products such as those made of Pyrethrum or Bacillus thuringiensis var. kurstaki.

The chemical and biotechnological fight must be done using crop protection products authorized for the type of treatment mentioned.

Considering the many generations that this moth plays and the different stages of development achieved in a season, it could be very efficient a mixture between a biotechnological product (growth regulators, chitin inhibitors) along with anti knockdown insecticides.

The most appropriate time to carry out the treatments and prevent the damage is during the hatching of the eggs, or in the early stages of larval development.

What do we do here in Vivai Capecchi

Very well aware of the damage that a single infected plant can cause an entire garden, we take care of our products with a biological product containing Bacillus thuringiensis var. kurstaki.

We work to prevent and treat this problem by following the insect’s biological cycle, working directly on the new generations.

Practically, when the insect feeds on plants treated with Bacillus thuringiensis var. kurstaki, this latter produces the toxin that blocks the insect’s gut and rapidly leads to death.

The ideal conditions for this to happen exist only in those individuals that possess a digestive system with a pH greater than 9, that is only specific groups of animals as mosquitoes, Lepidoptera larvae and little else; all mammals are totally excluded (men, dogs and cats including), fish, birds and practically all the good insects including natural predators. This mechanism ensures that it is eliminated only the target insect, respecting any other form of animal life Present On the treated plants.

If you need further clarification Contact us Directly and we’ll provide you all the necessary data.

THE BEAUTY OF A UNIQUE SPECIMEN – Spring at its best

What’s new in the spring?
Scroll to top
This popup will close in: